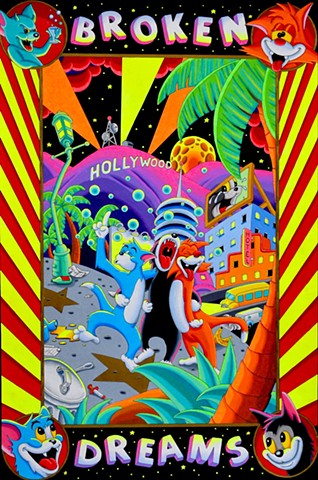 I’ve visited Los Angeles several times & always find myself mesmerized with Hollywood stories. Not just the successful ones, but also the tragedies that are all too common. From the stories of the ones that fall from grace to the ones that never made it, there always seems to be a Hollywood drama unfolding at every corner. Dreams are broken far too frequent so an idea was born using this theme. Thought to myself, what would Tom, from Tom & Jerry fame, be doing after his show is cancelled? With billboards still displaying his character, would Tom & company find themselves on the dirty part of Hollywood Boulevard drinking their fame away? Using a bit of influence from my own feral cats, I came up with a playful/heart breaking street scene on a night out in Hollywood.