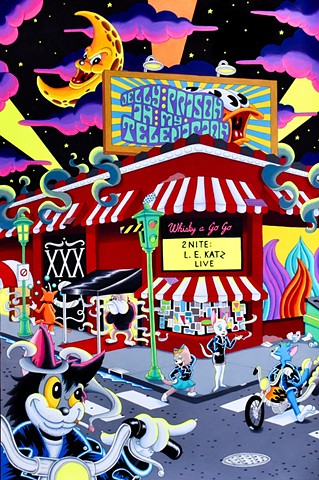 Aside from Hollywood, another area of Los Angeles that fascinates me is the music scene of the Sunset Strip. I grew up as MTV was hitting its stride in the 80’s & metal bands were the benchmark of that channel. I started hearing about The Whisky around this time as the place numerous groups, such as Motley Crue & Guns N’ Roses, would perform. As I got older, I discovered 60’s psychedelic rock & once again The Whisky was the place such groups as The Doors would play. I ended up researching its history & in the end I wanted to make a historical piece of an L.A. landmark. Using the Tom & Jerry characters from the Broken Dreams piece, I wanted to show the nightlife, complete with bikers & groupies, of an era when rock & roll ran the Strip www.udiscovermusic.com/stories/whisky-a….