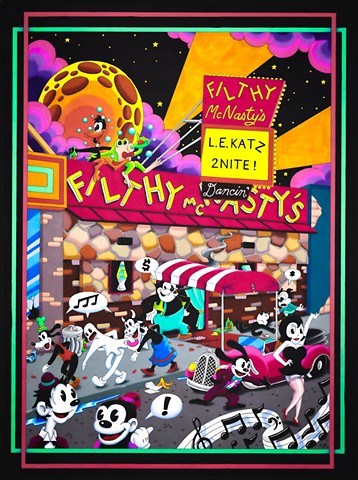 Filthy McNasty’s was the name of the club that was previously The Melody Room & currently The Viper Room on Sunset Boulavard. I took elements from all three clubs to make the art piece you see here using older cartoon characters from the 1920’s to illustrate a more vintage era of reference. I even used a different palette from my usual brightly colored neon one for effect. During my research, I learned that the current owner, Harry Morton, had just recently passed away on November of 2019. He was the founder & owner of one of my favorite restaurants in L.A. & Vegas—The Pink Taco. His father was the co-founder of the Hard Rock Hotel in Las Vegas which is where The Pink Taco restaurant resided. Harry’s half-sister was Domino Harvey, who has a film loosely based on her life (starring Keira Knightley as Domino). Sadly, as tragic as Harry’s life was, tragedy would also hit Domino. She died of a Fentanyl overdose in 2005 shortly before the release of her film (a film directed by Tony Scott who would eventually commit suicide by jumping off the Vincent Thomas Bridge in L.A. seven years later). As it is well known, he Viper Room has a notorious past. The club was made infamous by the O.D. of River Pheonix on Halloween night in 1993.