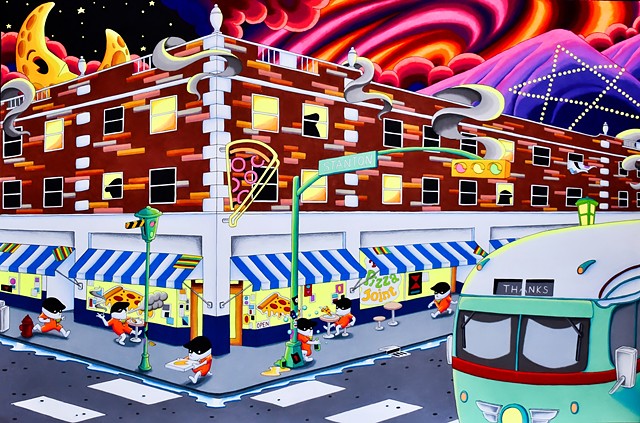 In 2017 I was approached by a fellow artist about putting some of my artwork up at a locally owned pizzeria, here, in El Paso, TX. I jumped at the opportunity without hesitation & by weeks end I had numerous art pieces up at the Mesa location of The Pizza Joint www.the-pizza-joint.com/index.html. The following year when I did my first El Paso Comic-Con, I was approached by multiple people saying they recognized my artwork from the Pizza Joint…& thus grew the relationship I would have with the restaurant & my featured artwork on their walls. I would change up the art every so often until I got an idea of making a historic piece based on the hotel that occupies the upstairs part of their downtown location.

To annotate briefly, Hotel Gardner is the longest running hotel in El Paso, TX, opening its doors in 1922. Several famous figures have stayed at the hotel including bank robber John Dillinger & American novelist, Pulitzer Prize & Academy Award Winner Cormac McCarthy who wrote such novels as The Road & No Country For Old Men. The ground floor facing the intersection is occupied by The Pizza Joint, which provided a perfect combination of history & appreciation to the restaurant that has given me the opportunity to showcase my art since 2017. I illustrated several characters from their logo for a cartoony street scene of patrons living the moment which often fills my pieces.