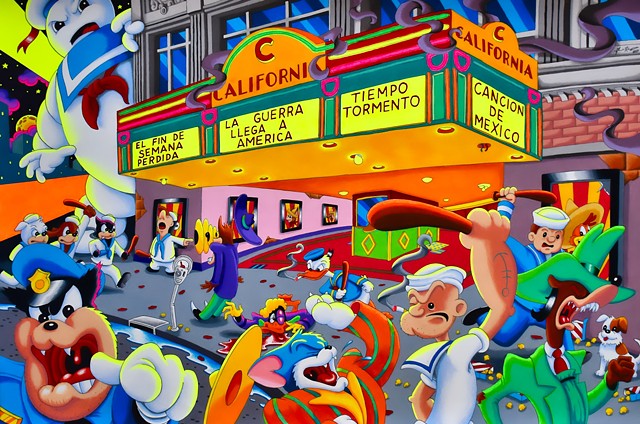 In 2018, a Chicano Exhibit was featured at the El Paso Museum of Art with art pieces owned by Cheech Marin epma.art/art/exhibitions/papel-chicano-…. One of the pieces showed a violent bar scene depicting the Zoot Suit Riots with sailors & Pachucos fighting each other. I could not get the art piece out of my head & soon began to research Zoot Suit Riot locations around Los Angeles. Then early 2020, I ran across an L.A. Times article about a man, now in his 80’s, describing the riots he witnessed as a boy www.latimes.com/local/lanow/la-me-ln-zo…. He described the California Theater in Downtown L.A., infiltrated by sailors looking for Pachucos & the violence happening outside. The description in the article was so vivid I was able to visualize the entire scene in my head. With a little help from archive photos of the theater, I laid down a violent street scene of familiar cartoon Navy characters targeting 1940’s cartoon characters depicting Pachucos in front of the California Theater.